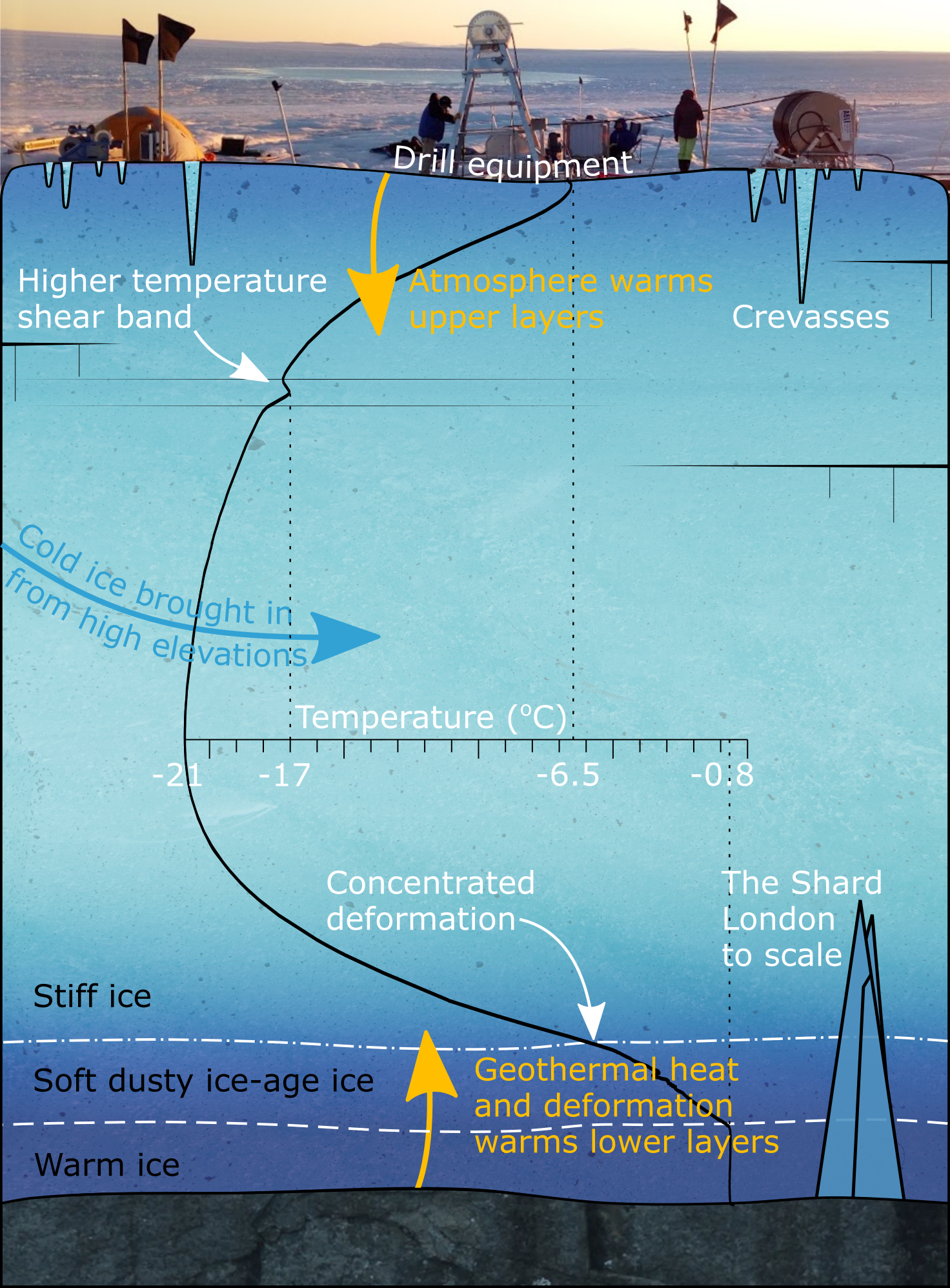 Our fibre-optic experiment on Store Glacier have produced the most detailed record of temperature from the surface of the Greenland Ice Sheet to its bed, more than 1000 metres below. The result significantly improves our understanding of ice sheet thermodynamics.

Compared to previous studies, which used discrete temperature sensors – often located tens or even hundreds of metres apart – the new approach has allowed us to measure temperature along the entire length of a fibre-optic cable.

We expected the temperature of ice sheets to vary smoothly with depth, with the warmest sections on the surface where the sun hits, and at the base where it’s warmed by geothermal energy and friction as the ice sheet grinds across the subglacial landscape toward the ocean. However, with continuous fibre-optic measurements from surface to the bed, we discovered that this was not the case.

With measurements taken along the entire cable, we found that the temperature distribution is far more heterogenous than we expected, with areas of highly localised deformation warming the ice further. This deformation is concentrated at the boundaries between ice of different ages and types. Although the exact cause of this deformation remains unknown, it may be due to dust in the ice from past volcanic eruptions or large fractures which penetrate several hundred metres below the surface of the ice.

We also found three distinct layers of ice in the glacier. The thickest layer consists of cold and stiff ice which formed over the last 10,000 years. Below, we found older ice from the last ice age, which is softer and more deformable due to dust trapped in the ice. What surprised us the most, however, was a layer of warm ice more than 70 metres thick at the bottom of the glacier. We know this type of warm ice from far warmer Alpine environments, but here the glacier is producing the heat by deforming itself.

You might already know the fibre-optic technology from broadband internet in your home or at work. In these systems, large quantities of information are provided through light pulses transmitted in the cable. In this study, we recorded the scattering of light in the fibre-optic cable using a computer to transmit laser pulses in the cable and then record the distortions which depend on the temperature of the surrounding ice. Last year, we published our findings from fibre-optic sensing of acoustic properties in Store Glacier. In the new experiment, we resolved the vertical ice temperature distribution with unprecedented resolution.

With these continuous measurements, we are building a much better understanding of the properties of Store Glacier and its bed. This is allowing us to better understand why the Greenland Ice Sheet is losing mass so quickly and why discharge of ice from glaciers such as Store is one of the principal causes of ice loss and sea level rise.