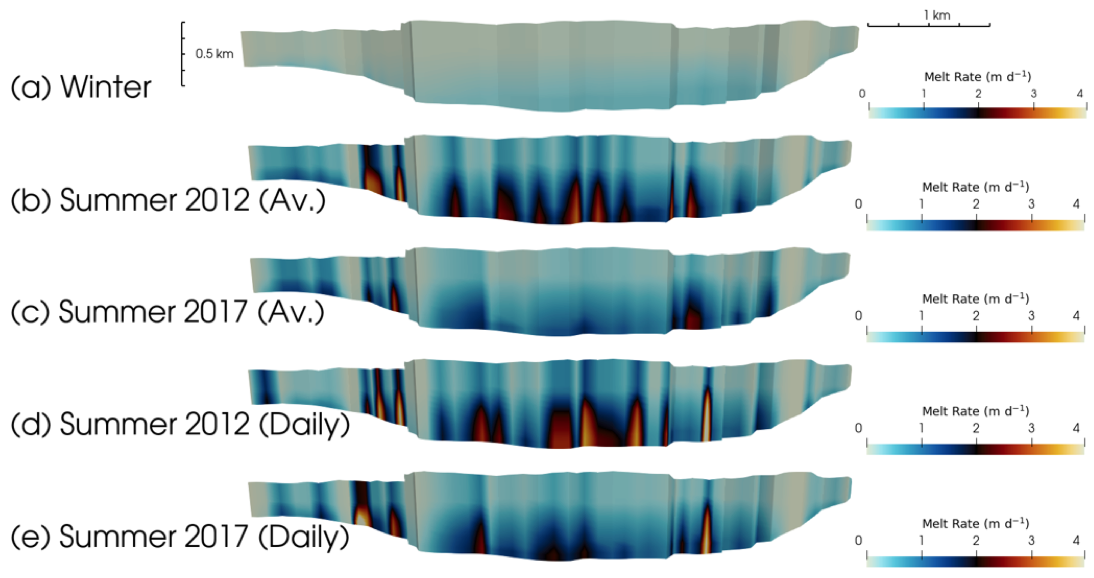 Plumes at the calving front in different simulations. There’s a slight blue tinge, even in winter!

In a new article published in The Cryosphere, the RESPONDER team reports how a channelised subglacial drainage system evolves and how discharge into Ikerasak Fjord affects melting the Store Glacier’s calving ice front. The team modelled the subglacial drainage network of Store Glacier in the high-surface-melt summer of 2012 and low-surface-melt summer of 2017, as well as in a winter when there is no surface melt. We show that the subglacial drainage system remains active all year, with channels fed by basal melt persisting in the lower 5 km of the glacier all year round due to frictional heating. This leads to meltwater plumes forming even in winter, causing melt in excess of 1 m/day, and indicating that fast-flowing tidewater outlet glaciers are hydrologically active throughout the year. In summer, channels become larger and grow in extent. The team found channels to extend up to 55 km inland in 2012, a record year of intense surface melting. In 2017, when the summer was considerably colder, the channels extend only 30 km inland, suggesting that the subsequent dynamic impacts of surface melt extend far into the interior of the ice sheet. We also found that there was no relationship between the amount of surface melt happening on the glacier and the amount of melting caused by plumes fed by subglacial discharge at the front. This shows that the structure of the subglacial drainage system plays a key role in mediating the delivery of freshwater to the front of the glacier.