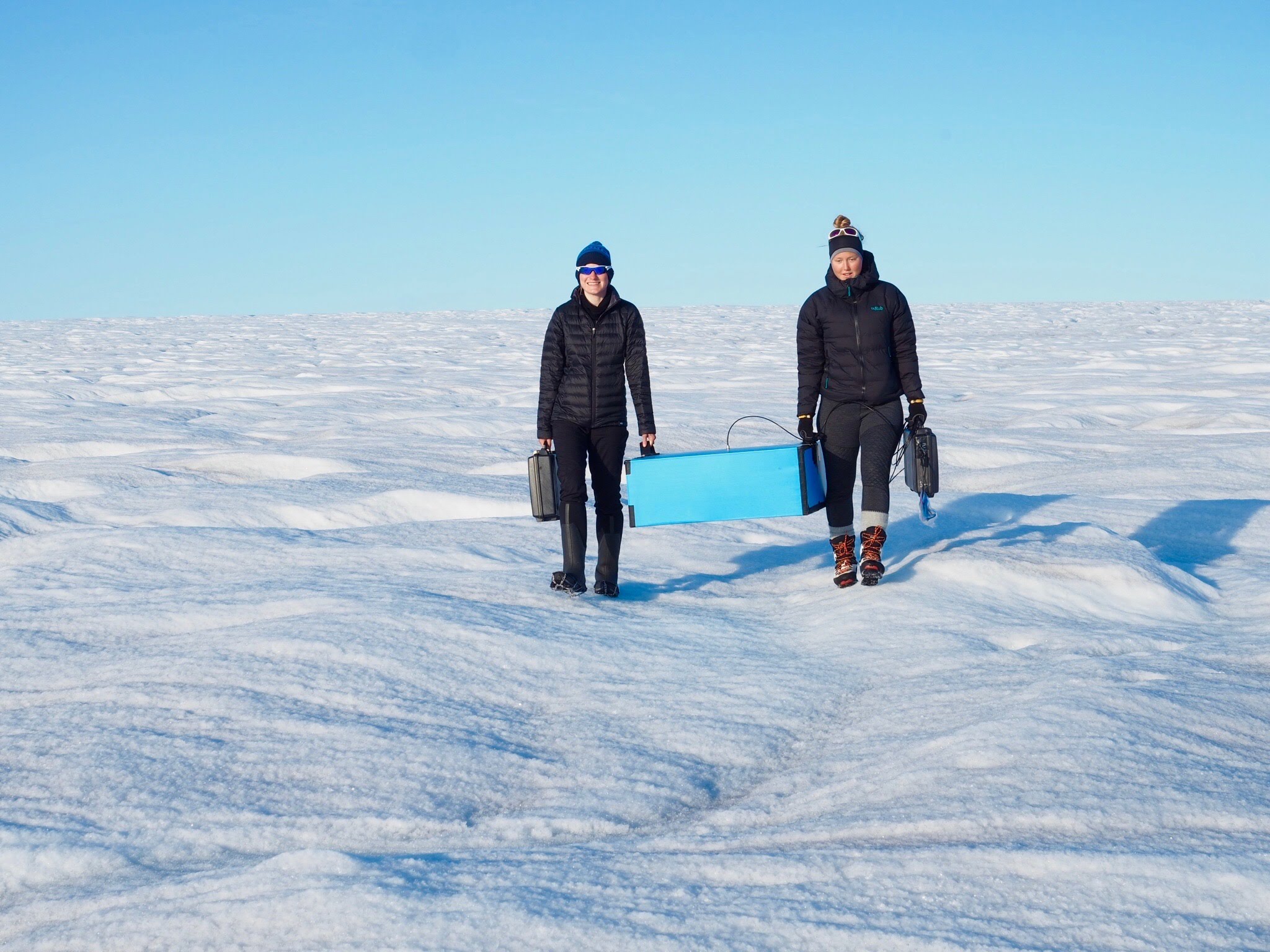 Measuring the ice thickness at the RESPONDER drill site.

Sean Peters, Eliza Dawson, and Mickey MacKie from Stanford University deployed a number of different radar systems on Store Glacier. Sean experimented with passive radar using the Sun as a radio source for bed echo detection. Mickey, Sean, and Eliza tested a bistatic radar system developed by Nicole Bienert and Sean Peters during the 2018 Greenland field season, which was then further upgraded by Nicole at Stanford this past year. Bistatic radar consists of a stationary transmitter and moving receiver antenna; the different offsets enable the characterization of the thermal properties of the ice. A SISO radar system (Single Input Single Output) was also set up and left on the ice to continuously gather data throughout the year.

The second mode of deploying ApRES is called MIMO (multiple input / multiple output). In this case, we use up to 8 transmitting antennas and 8 receiving antennas to create a phased array consisting of up to 64 virtual elements. The MIMO array turns the ApRES into an imaging radar, which allow us to obtain information about the 3D geometry of reflectors in the ice, and of the bed itself.

The MIMO array in 2019, after experiencing a year of harsh weather, melt, and a crevasse opening up under it!

The primary reflectors in the ice are contrasts in chemical composition caused by varying atmospheric conditions and volcanic eruptions. These layers are traditionally traced in two dimensions to see how the ice deformed along that path (see Layers figure), but the MIMO has enabled 3D mapping of layers, providing more insight into glacial processes. This technique was developed by Tun Jan Young (2018).

The changes in the received power of radar signals can also estimate the amount of surface meltwater stored within and present beneath the glacier. A paper published by Alex Kendrick (Stanford University) using datasets collected from the same 2014 ApRES array deployment show that at Store Glacier, significant amounts of englacial water is present within a region of solid, damaged ice and persists until at least winter. This type of water storage has not been previously observed in solid ice. Because the routing of surface meltwater to the bed of the ice sheet is one of the primary controlling factors of its flow speed, the results of this study may very well explain some of the complex flow behavior seen in Greenland’s glaciers (Kendrick et al., 2018).

During the Summer 2017 field campaign, two ApRES units were installed on Store Glacier, one with a MIMO setup near RESPONDER’s drill sites at R30 (~30 km from the glacier terminus), and the other with a SISO setup farther upstream, ~60 km from the glacier terminus. The MIMO ApRES array was comprised of 8 transmitting and 4 receiving bowtie antennas (constructed in-house) arranged to create a linear array with 32 virtual elements, and was oriented 145 °N which aligns to the cross-flow direction of Store Glacier. The ApRES unit was configured to operate 12-hourly in a dual quasi-monostatic and MIMO mode collecting 64 chirps every 6 hours . The temporal resolution was conservatively calculated to ensure the ApRES to continuously collect data for at least one whole year. Preliminary processing of the dataset show a large bed protuberance beneath the radar array; researchers at Cambridge and Stanford universities will be conducting further work in attempt to resolve the other artefacts seen in this image (see 2D Mimo depth profile figure).

This MIMO was revisited and maintenanced with the same configuration over the 3 summer field seasons, which will allow us to determine with hourly temporal resolution how the glacier’s internal structure has evolved over multiple years. The MIMO was decommissioned during the Summer 2019 field campaign, as a crevasse formed underneath it and in the process broke multiple transmit and receive ports of the ApRES (see MIMO crevasse figure).

In 2017, the SISO ApRES at R60 (~60 km from the glacier terminus) was installed alongside a GPS, operating 1-hourly to give 24 measurements of the ice column every day. During the 2018 field season, two ApRES units were installed in SISO configuration on Store Glacier, one near the 2018 RESPONDER drill site and the other at the GPS near the edge of the lake. During the 2019 field season, these two SISO ApRES units were moved to the 2019 drill site locations. Lastly, a temporary SISO was deployed at the 2019 drill site location to capture variabilities at the lake bed with 5 minute resolution over a 3 day period while the fiber optic system was deployed. 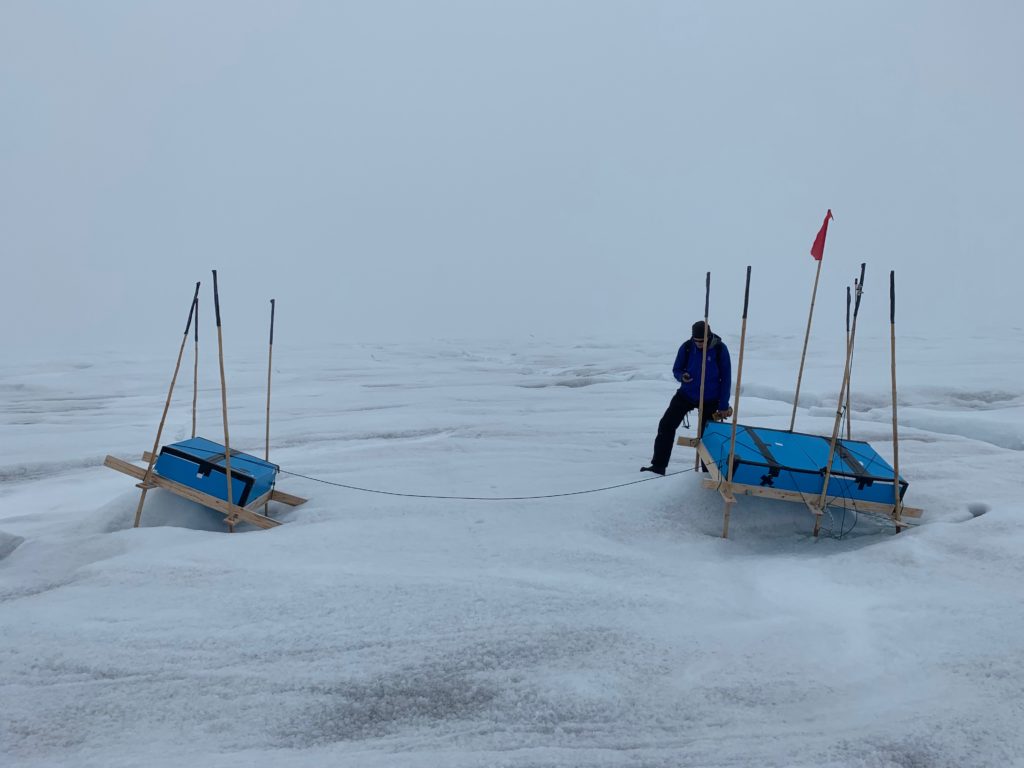