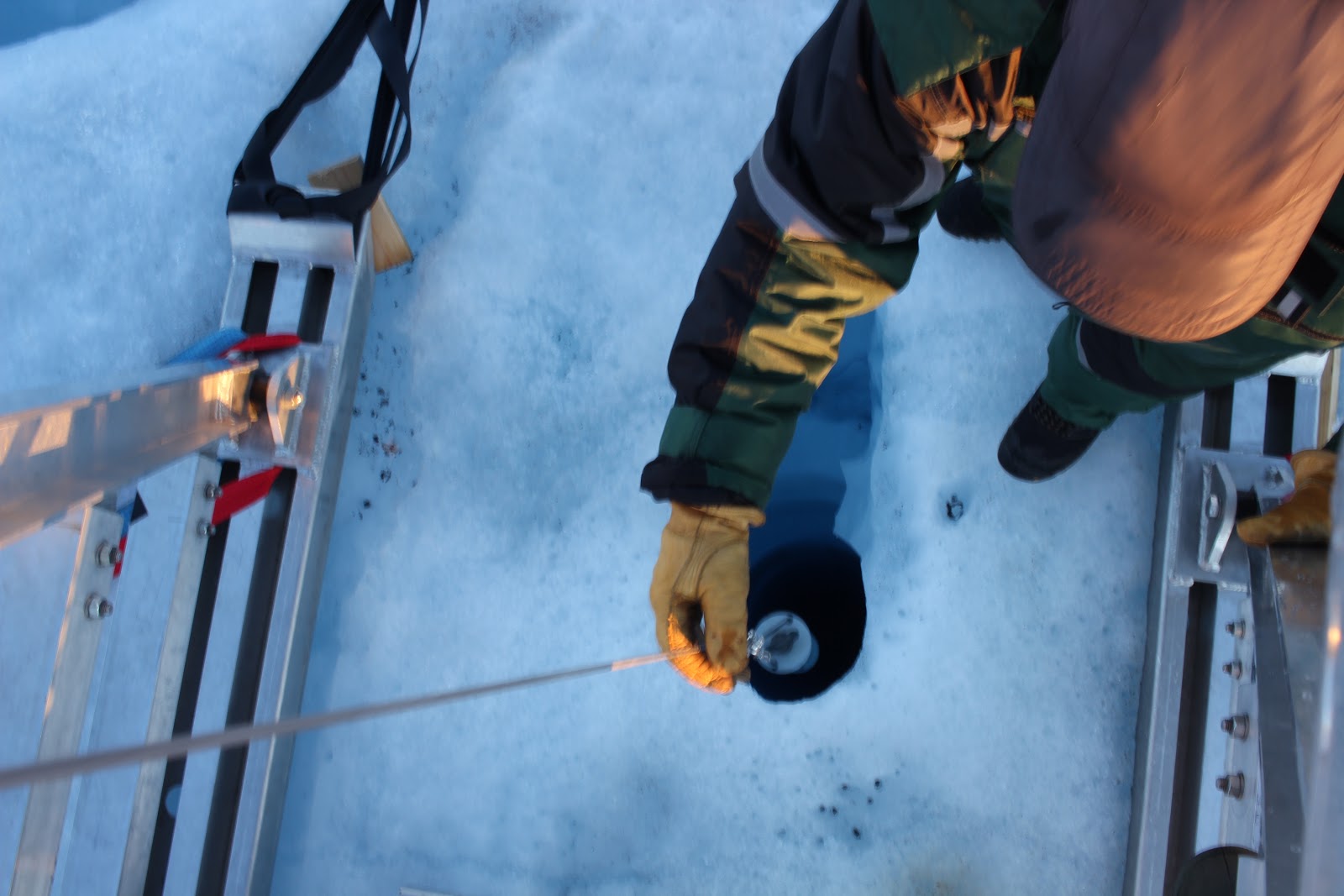 When hooked up to a suitable analyser, fibre-optic cables, much like those used for superfast broadband, can function as very long, very bendy thermometers or strain gauges, which record data at all points along their length. This incredible effect has been exploited for over a decade by oil companies, keen to monitor the temperature throughout a borehole, and by construction companies who want to monitor the movement of important infrastructure such as dams. In fact, the market for fibre-optic sensing has expanded rapidly over the last decade to reach $3.38 billion in 2016, with no sign of slowing. This growth is a result of research reaching commercial maturity, and the much sought after ability of fibre optics to monitor structures and boreholes at very high spatial resolutions. 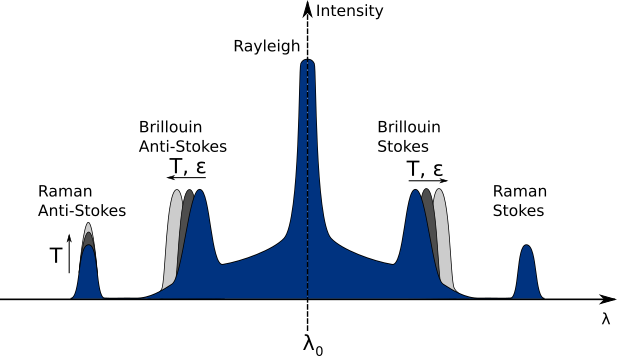 Rayleigh, Brillouin, and Raman scattering. T is temperature, ε is strain, and ƛ is wavelength.

So how do these incredible fibres work? It’s all to do with light of certain wavelengths getting scattered at certain parts of the cable. For temperature sensing, this is the Raman part of the backscatter profile, first discovered by Sir Chandrasekhara Venkata Raman who was awarded the 1930 Nobel Prize in Physics for the phenomenon now named after him. Raman scattering is a result of inelastic scattering of light. In other words, an amount of energy in the form of light collides with a particle, which then absorbs or loses a small amount of energy when it re-emits the incoming light. Elastic (Rayleigh) scattering, on the other hand, (which makes the sky blue) means the particle in question does not lose or gain any energy. In the case of Raman scattering, the scattering is called Anti-Stokes if the backscattered light is more energetic, and Stokes if it is less energetic. The intensity of the Anti-Stokes component is greater if the temperature at that part of the cable is greater, so a relationship to temperature can then be obtained from light! The intensity of the Anti-Stokes component is not affected by other factors, meaning it is a reliable measure of temperature in any situation.

Multiple return signals from a single laser pulse. The return pulses are far lower than the outward signal and are distributed evenly throughout the fibre.

The great advantage of fibre optics in glaciology is that we can get high spatial resolution. This means that, where we would previously interpolate between far-spaced data points in a through-ice profile, we can now obtain an extremely dense series of measurements requiring minimal interpolation, giving us a picture of what the temperature actually is in hitherto-unseen clarity. In particular, it will hopefully provide an unprecedented view of the lowermost ~100 m of the through-glacier profile, where most internal deformation occurs. This greater detail can then feed into large-scale glacier models, which will allow for more accurate predictions of global sea-level rise over the coming centuries. Previously, work by Scott Tyler and others at the University of Nevada has used distributed temperature sensing to observe changes in the McMurdo Ice Shelf (an extensive floating glacier outlet). This produced impressive results, with enough detail to show brine rejection as the borehole refroze and tracking of ice-shelf melting due to incursion of warm ocean currents. The setting Scott was dealing with meant there was little shear in the ice body to potentially disrupt the cabling. For us, this shear presents the greatest challenge, as there is the possibility that the cabling will snap soon after installation. To remedy this, we intend to drill a narrow borehole so that the ice and cable temperatures reach equilibrium quickly, allowing us to start measurements as soon as possible. 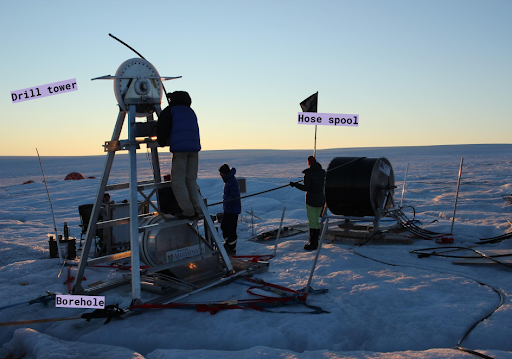 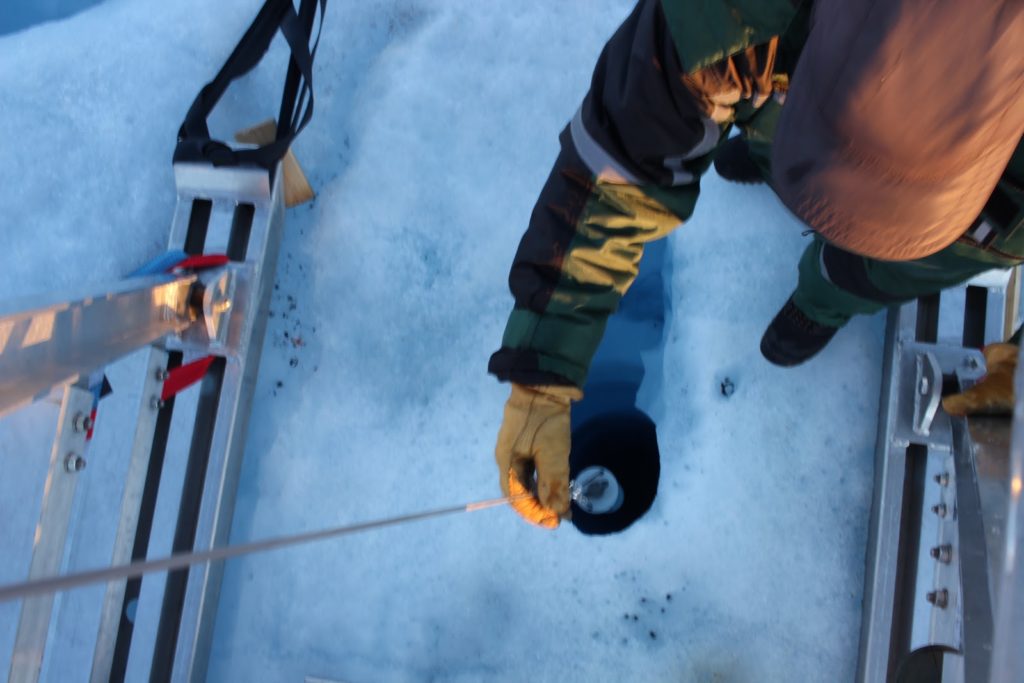