Conversations on the ice sheet took on a sort of cyclical quality. If you’re with the same seven people for an entire month, with very little external stimulus, it’s fairly easy to run out of things to say. One strategy to cope with this was reeling out topics to exhaustion, for example discussing blue storage barrels from every possible angle until you could take no more. Alternatively, much like a goldfish and its entire life, we just forgot our previous conversations and brought them up all over again. To this effect we had about a 3-day periodicity for opinions on the film ‘Interstellar’, making the showing when we returned from the ice all the more exciting for those who hadn’t yet had the pleasure of viewing it. Discussing dearly missed foodstuffs was also never far away, cropping up probably every other day. However, perhaps the firmest bastion of RESPONDER camp chat was wellies. This may seem a little unusual, but when you’re standing on frozen water for an entire month, the importance of suitable footwear cannot be underestimated. Especially when said frozen water is melting rather a lot, meaning puddles of slushy ice several feet deep were not uncommon, along with full-on streams of ice-cold meltwater.

Bryn Hubbard was often the instigator of such conversations, having unfortunately realised at the helipad before flying onto the ice that his prized wellies were back in Wales. This left Bryn with boots that you could probably pick up for £5 at a car-boot sale 5 miles outside Aberystwyth and the need to wear rather a lot of socks. Sam Doyle opted for wellies with nails driven through in order to increase grip, quite possibly at the expense of waterproofing. I opted for a pair of Dunlop Purofort thermal, steel-toe-capped wellies designed with North Sea oil riggers in mind. With an inch of rubber on the sole, they certainly did the trick in keeping your feet snug. They even took a 20 km hike installing geophones in their stride (ahem). An unfortunate unforeseen result, however, was the total removal of hair on any part of my leg that happened to rub with the wellies. This hair remained missing for a good month following fieldwork.

Tom and Rob realising that mountaineering boots just don’t do the job if you’re sat around too long. 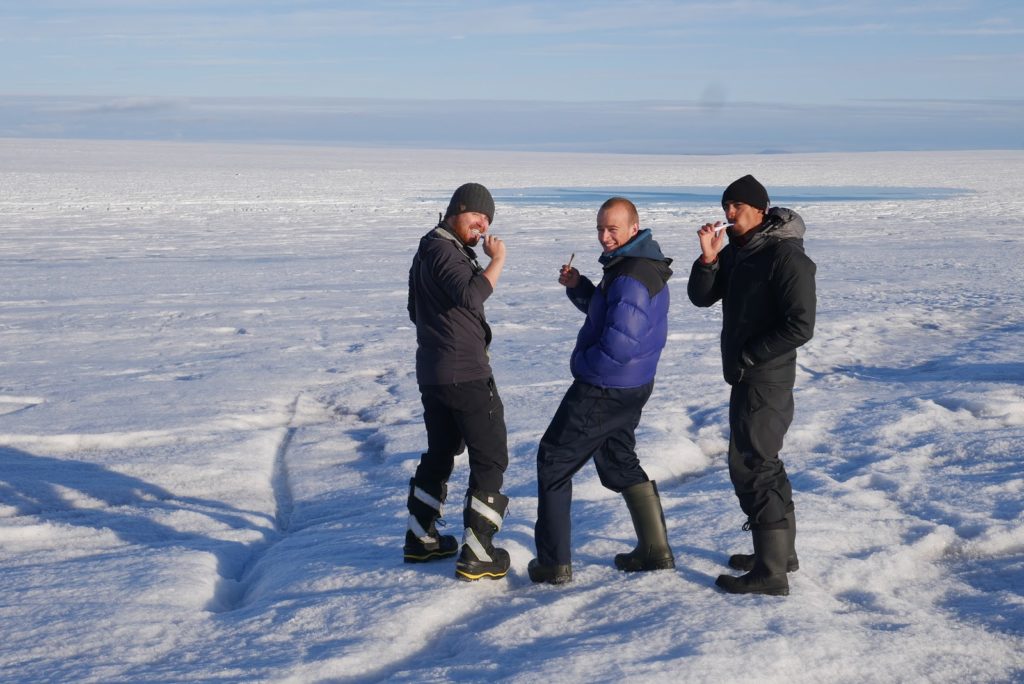 From left to right, Tom in trusty second-hand British Antarctic Survey boots bought on the cheap from the Salvation Army around the corner from SPRI. Rob in Dunlop’s finest, feeling toasty with an on-trend one-boilersuit-leg-over-boot. Sean in drawcord-topped thermal wellies.

Tom’s reclaimed British Antarctic Survey baffin boots turned heads when it wasn’t too wet, or when he had to let his main pair dry because he’d fallen in a puddle (again). Talking of puddles, we come to a recurrent issue with wellies: overtopping. Everyone was victim to freezing water pouring in at least once, generally a result of being too optimistic when hopping over a stream, or being caught unawares by a particularly deep patch of slush. The result was cold, sodden feet and several days in a spare pare whilst the totally unventilated wellies dried out in an Arctic breeze. Often this meant putting up with inferior mountaineering boots for a few days; whilst light and crampon compatible, these just did not offer the same insulation. A final unexpected result of wearing wellies for a month – for me at least – was the utter surprise in remembering upon returning to civilization that feet are designed to splay a little. An incredible amount of freedom was felt by all team members upon strolling luxuriantly on a carpet in our base town of Uummannaq. In conclusion to this short monologue on wellies in remote, icy places: wellies matter, and you’ll thank your lucky socks if you adequately kit yourself out.