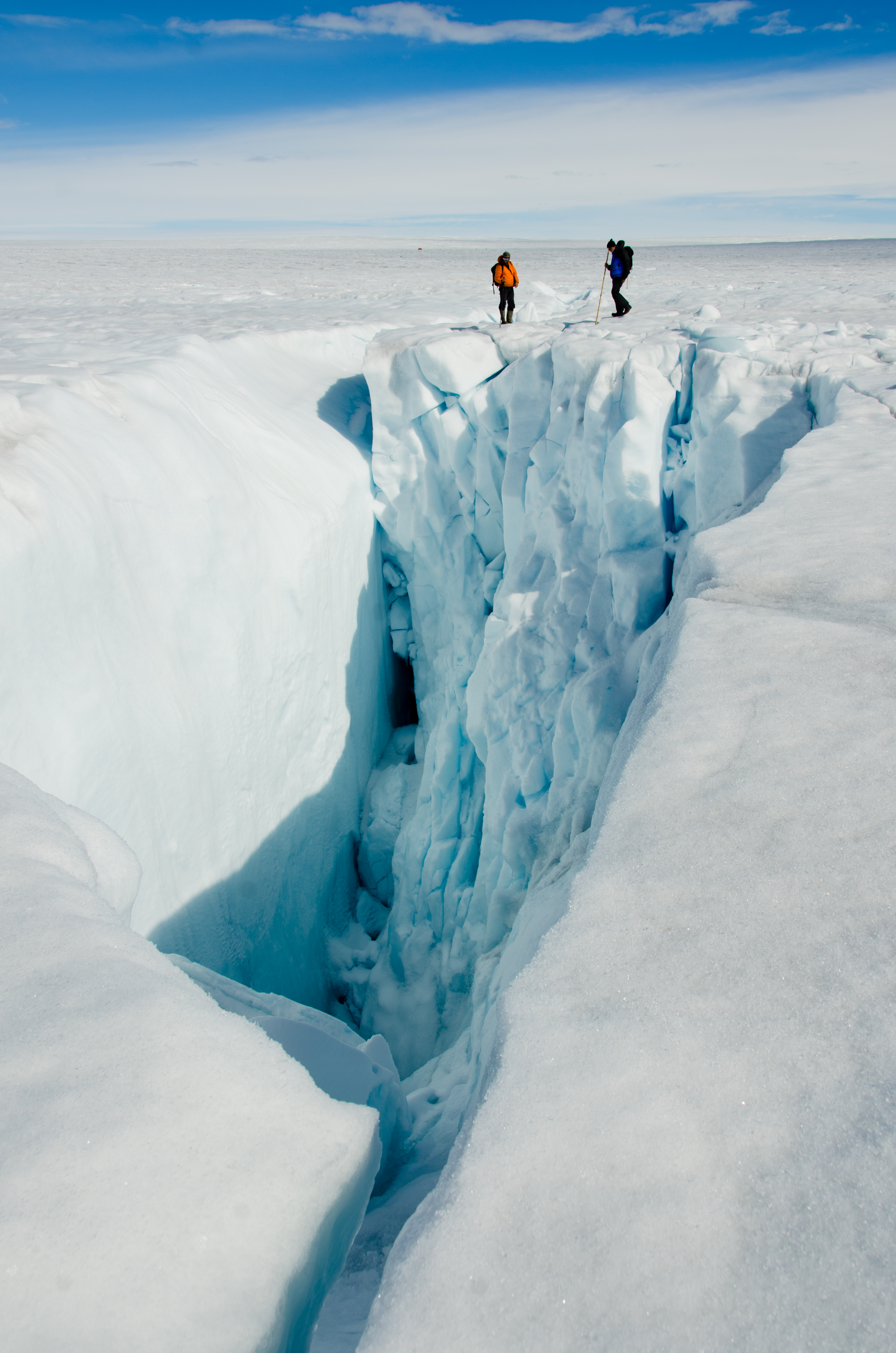 The RESPONDER team has published new findings in the journal Nature Communications.

We used a combination of 3D computer modelling and real-world observations to show the previously unknown, yet profound dynamic consequences tied to a growing number of lakes forming on the Greenland ice sheet.

Every summer, lakes form on the surface of the Greenland ice sheet each summer as the weather warms. Many of these lakes exist for weeks or months, but most drain in just a few hours when fractures suddenly open across the lake bottom. Little is known about these fractures, which transfer huge quantities of water and heat directly to base of the ice sheet. The affected areas include sensitive regions of the ice sheet interior where the impact on ice flow is potentially large. 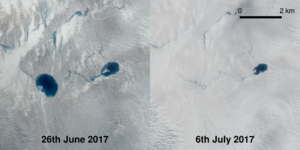 Sentinel-2 satellite imagery shows the disappearance of a lake on the Greenland Ice Sheet.

Previously, we thought that these ‘drainage events’ were isolated incidents, but our new research shows that the lakes form a massive network and become increasingly interconnected as the weather warms. When one lake drains, the water quickly spreads under the ice sheet, which responds by flowing faster. The faster flow opens new fractures on the surface and these fractures act as conduits for the drainage of other lakes. This starts a chain reaction that can drain many other lakes, some as far as 80 kilometres away.

These cascading events that we have identified include one case where 124 lakes drained in just five days. During this event the flow of the ice sheet accelerated by as much as 400% and this was only one of six observed events. Most lakes drain in this cascading manner.

Our study demonstrates how forces within the ice sheet can change abruptly from one day to the next, causing solid ice to fracture suddenly. The model shows that lakes forming in stable areas of the ice sheet drain when fractures open in response to a high tensile shock force acting along drainage paths of water flowing beneath the ice sheet when other lakes drain far away.

This growing network of melt lakes, which currently extends more than 100 kilometres inland and reaches elevations as high a 2,000 metres above sea level, poses a threat for the long-term stability of the Greenland ice sheet.

The new findings by the RESPONDER team departs from the current consensus that lakes forming at high elevations on the Greenland ice sheet have only a limited potential to influence the flow of ice sheet as climate warms. Whereas the latest report by Intergovernmental Panel on Climate Change concluded that surface meltwater, although abundant, does not impact the flow of the ice sheet, the study suggests that meltwater delivered to the base of the ice sheet through draining lakes in fact drives episodes of sustained acceleration extending much farther onto the interior of the ice sheet than previously thought.

Our new findings show that the transfer of water and heat from surface to the bed can escalate extremely rapidly due to a chain reaction. In one case the team found all but one of 59 observed lakes to drain in a single cascading event. Most of the melt lakes drain in this dynamic way.

When a single lake drains, the ice flow temporarily accelerates along the path taken by water flowing along the bottom of the ice sheet. Lakes situated in stable basins along this path drain when the loss of friction along the bed temporarily transfers forces to the surface of the ice sheet, causing fractures to open up beneath other lakes, which then also drain.

What’s newsworthy about this work is that we show the transformation of forces within the ice sheet when lakes drain to be sudden and dramatic. Our new study shows that lakes draining in one area produce fractures that cause more lakes to drain somewhere elsewhere. To investigate this effect we used high-resolution satellite images, which confirm that fractures on the surface of the ice sheet open up when cascading lake drainage occurs. This aspect of our work is quite worrying!

We found clear evidence of these crevasses at 1,800 metres above sea level and as far 135 kilometres inland from the ice margin. This is much farther inland than previously considered possible.