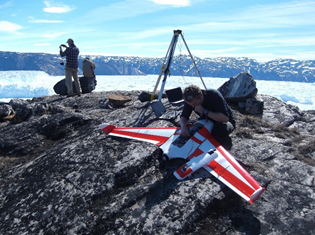 Flying drones was one of the main scientific activities we undertook in the field season last summer. We were using them to gather data on the calving front and on the ice surface farther inland, with the objective of tracking small changes in surface elevation caused by hydrological variations at the base of the glacier. Here follows a short post detailing one of our early attempts in the first couple of days to get the things working…. 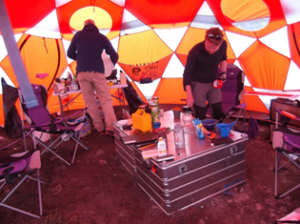 Inside the main tent, which very quickly turned into a mess.

After lunch, having nearly fallen asleep in the warm tent, I mainly helped Tom fly his drones, during which I discovered that the man has an impressive dedication to mosquito genocide. Impressive to the point of being almost a slightly-disturbing monomania. We were planning to do several test flights to check everything was working OK – if things went well, we’d be gathering real data within the next couple of days! First, though, the drone had to be set up and all the instruments calibrated, which involved an awful lot of beeping and flashing lights. As well as a strange dance where someone (me, and, later, Poul) whirled the drone around our heads as if we were performing some sort of high-octane sci-fi remake of Dirty Dancing in order to calibrate the compasses. This took a bit of time and led to several restarts of the drone’s electronic brain, accompanied by various repeating error messages being blared out in the drone’s synthesised voice. Not exactly Terminator just yet….

The first two test flights were a roaring success – we proved the airframe itself, the GPS and the camera were all working properly[1]. The autopilot also functioned – we sent it off on a pre-programmed flight path and then spent ten anxious minutes waiting for it to reappear, which it thankfully did. My main job was launching the drones, which involved wearing a falconry glove and lobbing the drone as hard as I could when Tom counted to five[2]. The glove was so, if I got it a bit wrong, the propeller didn’t take off a finger or give me a big gash in my forearm[3]. As you might guess, this was only realised as a problem when someone did nearly lose a thumb a couple of years ago…. The landing was the most hazardous bit – being on a bit of Arctic tundra above a glacier, there is, unsurprisingly, rather a dearth of level, flat, unencumbered space. What there is is a veritable cornucopia of rocks sitting on the bits of level, flat space. Tom, therefore, on both flights, ended up landing the drone into a rock. Well, ‘landing’ is a strong term, implying a certain degree of control. ‘Crashing’ would be a more accurate description. Fortunately, it’s fairly robust and light, and he’d slowed it down to a very low speed, so damage was minor in both cases. It’s basically quite bouncy, as the shell is polystyrene. 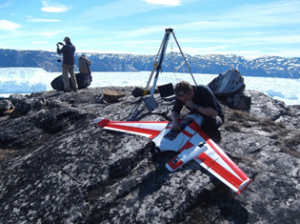 Tinkering with one of the drones whilst it beeped and shouted at us….

Then came the third flight, which went less well. In that the drone crashed on take-off. Not entirely sure why – we think it didn’t reach full throttle – so it kind of banked right and flew straight into a rock, which left it teetering on the cliff edge a few hundred metres above the icy fjord. Fortunately, it was just about recoverable and hadn’t actually been all that badly-damaged, but it did put an end to the day’s drone-based activities whilst the shell was glued back together and all the instruments checked.

[1] As it later turned out, this wasn’t entirely true, but the details of how it wasn’t working can wait for another post. At this stage, we were just happy it took some pictures and didn’t fall out of the sky.

[2] In a reverse Holy Grail, the number to be counted was very definitely five and not three, excepting that thou then proceedest to five.

[3] It’s not a massive propeller and it’s only plastic, but it will do you a fair bit of damage when it’s spinning at full power.