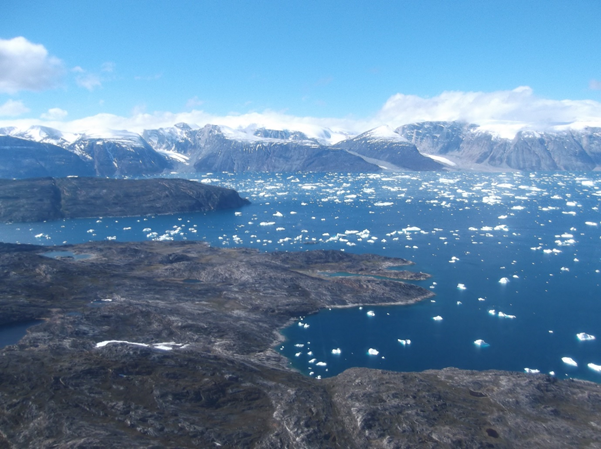 Hello! To give you an insight into the fieldwork process, I’ll be publishing a few extracts on here from the diary I wrote whilst on the Summer 2017 fieldwork season. Here’s the first one about our first day at the tundra site and the travails of setting up camp. 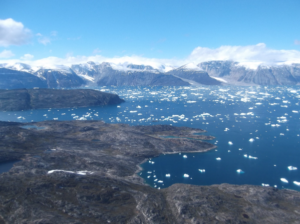 One of the very many scenic shots of the fjord.

Today was finally the day – we’d be flying out to Store Glacier sometime around lunchtime. This meant it was up early to get down to the heliport, get all our stuff out of the relocated container, get it weighed[1], and get it loaded onto the helicopter. This took all morning and, unsurprisingly, involved a lot of heavy lifting. It was made harder by the fact that we were in fact temporarily splitting up – four of us (me, Poul, Tom and Martin) would be heading to the so-called BBC Camp[2] on the northern side of the glacier terminus; Sam and Antonio would be camping on the south side. So, we had to split things up, which involved unpacking and repacking various crates on top of everything else. This added bit of complexity was because we were now four days behind schedule, so things had to be rejigged a bit to ensure we got everything done that needed doing without breaking the bank with extra helicopter flights. I was very glad none of this was in any real way my problem. Poul was certainly pretty tired and stressed by it all. 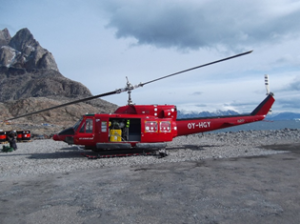 The helicopter to take us up-fjord.

Eventually, we were ready to lift off. Tom and I were crammed into a couple of seats in the luggage compartment; Poul and Martin were up front with the pilot. I have been in a helicopter before, but it’s still a bit weird when you just take off vertically with minimal apparent fuss, apart from the din of the rotors. I also felt rather as if I were in a Vietnam movie, with all the crates and cargo webbing floating around. This was made even more the case by the fact that the helicopter we were in was a Bell 212, as used by the Americans in Vietnam and as seen in every Vietnam movie ever. It is, in fact, entirely plausible that the helicopter we were in had been used in the Vietnam War, but there was no obvious way of confirming this. No handy bullet holes or some such….[3]

The view from the helipad up-fjord towards our destination.

The flight was, as you might expect, spectacular. We got panoramic views of the fjord, the sea ice, the glacier; the whole Greenlandic shebang as it were. Tom and I both barely stopped taking pictures for the whole half an hour it lasted. Then we landed and it was back to Earth with a bump[4]. On getting out of the helicopter, the first thing I noticed was the mosquitoes. And the second through 4,689,503rd thing I noticed were also mosquitoes. Never has the word ‘swarming’ been more apt. It was out with the DEET very quickly to try to discourage them from eating us alive. The 4,689,504th thing I noticed, though, was the view. It was spectacular. The whole calving face stretched out in the fjord below us, running for 6 km until the cliffs of the southern fjord wall were reached. It was easy to see why the BBC had chosen this as a location to film from.

Store Glacier as it appeared at the beginning of our stay. 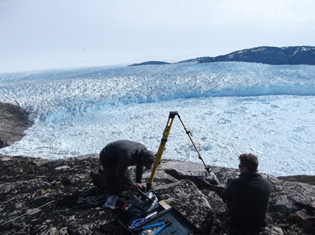 Setting up the interferometer.

However, we now had to unload all the equipment and then set up our camp. Lots more heavy lifting ensued. And we also had to unload the other two helicopter flights that brought the rest of our stuff. It was a rather long and tiring afternoon. Setting up the radar interferometer[5] was particularly toilsome, as it was situated a kilometre or so from the camp across rough terrain and the car batteries we were using to power it weighed a tonne[6]. Lugging those over was fun – Tom, Poul and I ended up doing one in relays[7]. Martin just casually hoisted one onto his shoulder and sauntered off with it. Some people just have too much upper-body strength. During the set-up process, I also fell flat on my arse, just like in Chernobyl, and injuring the same bit of my pelvis in just the same way[8]. So now I had a rather painful lower back, as well as very sore hands. Great. To make things even better, I also developed a sudden case of urticaria[9] for no as-yet-discernible reason. It might have been an allergic reaction to the DEET. It might have been a reaction to some combination of stress, tiredness and being really smelly. It might have been something else entirely. No idea[10]. Though, if it were the DEET, it seemed strange that it was only affecting my arms and legs, where I hadn’t applied any, rather than my hands and face, where I had[11]. But, regardless, it was bloody itchy. At least it made the uncounted number of bites[12] more bearable – they barely showed up in my mental map of discomfort against the general background itchiness I was now experiencing. Some small consolation, perhaps. And the repellent was working, both the DEET and my all-in-one repellent and suncream, which I now resolved to use until I could work out whether my rash was DEET-related or not.

The interferometer in all its glory.

Finally, the camp was relatively shipshape. We’d managed to pitch all our tents – I’d got mine a bit wrong, but it wasn’t a bad first effort[13] and generally made the place look vaguely ordered. We’d even got the massive communal tent up after a frustrating game of trial-and-error – and we’d cleared some of the boxes away, moved things around and generally tidied up a bit. The radar interferometer was also now working and yielding data on day one, which was a personal first for Poul in the field. We’d located a nearby stream for water[14] and we’d set up the toilet[15]. We’d heard from Sam and Antonio over the satellite phone to confirm they were fine. We had the first of many freeze-dried ration packs for dinner. As you might expect, it wasn’t the tastiest thing I’ve ever eaten, but it did the job. It wasn’t as if I’d been expecting unparalleled gastronomic delights on this trip. So, all in all, a long day, but a successful one.

The final thing I noticed about our campsite, once dinner was over and we were making for bed, was how quiet it was, The only noise was us, except the background rumble of the glacier as it calved. Which sounded disturbingly like gunfire, from the dull boom of artillery, all the way through to the rapid automatic ack-ack-ack of a machine gun or AK47. But, it was good in a way that gunfire isn’t. It also meant sound travelled surprisingly far, so talking about someone whilst you thought they were out of earshot was a risky move. It was all very peaceful. If only I hadn’t been so itchy.

[1] Helicopters can only carry so much, so we needed to know how heavy everything was to split it up as best as possible into manageable loads.

[2] The BBC used it when they were filming some scenes for Frozen Planet and Operation Iceberg.

[3] Because you can find out about every helicopter ever on the Internet, unsurprisingly, looking up its serial number shows that this one had been built in 1973, but not used in Vietnam.

[5] Basically a radar with two receiving antennae that allow you to reconstruct a 2D picture of the thing you’re looking at. Very accurate indeed. We were going to be using it to look at the calving front and sea ice immediately in front of the glacier, as it would be able to detect very small changes that would be useful in studying how it behaved.

[7] In the process, Tom got knocked on the head by one. It wasn’t so much assault and battery as assault by battery. I’m stupidly proud of that pun. Can you tell? The whole process was a bit like the most unpleasant and drawn-out three-legged race ever.

[8] One of the rear crests (the point of bone you can feel just above your bum on each side).

[10] After further research and thinking, I’m reasonably certain the very sudden and large number of mosquito bites mentioned in the next line basically made my immune system go to Defcon 1 and do the immune equivalent of the scene in Predator where they just spray bullets at the jungle for two minutes solid. That would also explain why the rash persisted to some extent throughout my time camping, but then cleared up quickly once we got back to Uummannaq and were free of mosquitoes.

[11] At least the advantage of being in Greenland is that you’re generally in enough clothes that there are only a very few places where insects can get at you. So protecting yourself is made a little easier.

[12] Yes, it got that big that quickly that I stopped counting. There was just no point. A reasonable extrapolation is that, by the end of the trip, I’d probably accumulated a few hundred.

[14] Which we didn’t treat in any way – there wasn’t anything living in it. We were pretty much the only real source of pollution, so as long as we didn’t do something stupid such as pooing in our water supply, we were pretty safe just drinking it neat.

[15] Not anywhere near the stream, don’t worry. It was probably one of the most scenically-located toilets in existence. This led to a conversation about most scenic pisses we’d taken between Tom and me. That was an odd conversation.