RESPONDER is an ERC-funded research project based at the University of Cambridge. It aims to develop an intergrated understanding of the evolution of ice flow on the Greenland ice sheet and the co-evolution of hydrological networks operating at its base. By employing multiple, complementary approaches, ranging from geophysical imaging techniques to direct exploration in kilometer-deep boreholes, the project is collecting an unparalleled stream of observational data from the basal environment which is rarely studied, yet responsible for making Greenland glaciers flow faster than glaciers anywhere else on Earth.

Principal Investigator
Poul is is a Reader in Glaciology at the Scott Polar Research Institute. His research focuses on glacier dynamics and ice-sheet interactions with the atmosphere and ocean, and on a broad scale the interactions of the global cryosphere with Earth’s climate system.

Co-PI
Bryn is a Professor in Glaciology at the Centre for Glaciology in the University of Aberystwyth. His research aims to better understand the links between motion and subglacial drainage via hot-water borehole access.

Research Associate
Sam is a research associate at the Centre for Glaciology in Aberystwyth University. His research uses a combination of borehole sensors and GPS units to understand the dynamics of the Greenland Ice Sheet.

Research Associate
Charlie is a geophysicist at the Scott Polar Research Institute in the University of Cambridge. Her research investigates the subglacial properties of the Greenland Ice Sheet using passive seismic techniques.

PhD Candidate
Tom is a PhD candidate at the Scott Polar Research Institute in the University of Cambridge. His research uses UAV technology to explore interactions between surface melt and subglacial processes on the Greenland Ice Sheet.

PhD Candidate
Samuel is a PhD candidate at the Scott Polar Research Institute in the University of Cambridge. His PhD project aims to develop a fully-coupled model of a tidewater glacier, using an open-source, 3D glacial flow model.

PhD Candidate
Rob is a PhD candidate at the Scott Polar Research Institute in the University of Cambridge. He uses the scattering properties of fibre optics to obtain temperature and strain profiles, which will lead to better constraint in numerical models. 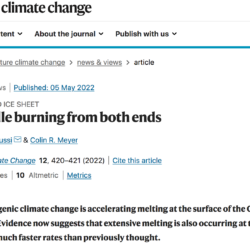 “A candle burning from both ends” is a fitting metaphor for the high melt rates RESPONDER reported from beneath the Greenland Ice Sheet. The metaphor comes from News & Views featured in Nature Climate Change. The article picks up on the fact that the melt rates we observed at the base of Store Glacier are[…] 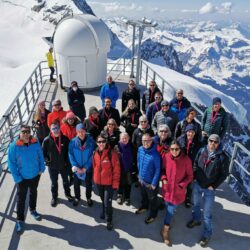 Swiss and UK researchers team at the top of Europe (3,450 m)

On 25 March, 2022, Swiss and UK polar and alpine researchers met up at what is almost literally the top of Europe. The event Postcards from the Anthropocene brought everyone to Jungfraujoch, with the famed Eiger Express ending at an elevation of 3,450 m. The visit was informal discussion about how Earth’s cryosphere is changing,[…] 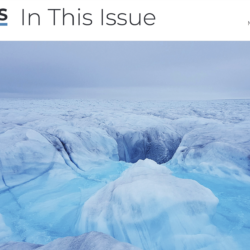 From deep below to up on front

We are pleased to see our work published in the Proceedings of the National Academy of Sciences, with a special mentioning on the front page of “In This Issue”. The high basal melt rates we observed at Store Glacier have now featured in about 100 different news outlets. Go ApRES! (the specialised radar system we[…] 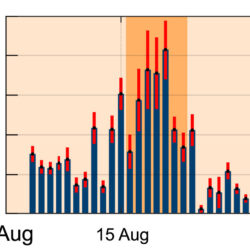 Our findings published last week show the Greenland Ice Sheet is melting faster than we thought. Much faster in fact, and – surprisingly – from the bottom up. The news media caught on to this. So, what’s going on at the bed? Here is a (non-technical) explainer: To record basal melt rates, we used a[…] 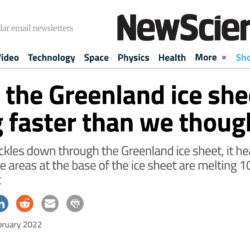 RESPONDER in the news

Our observation of high basal melt rates beneath the Greenland Ice Sheet is in the news. The findings published earlier this week in the Proceedings of the National Academy of Sciences has been reported by New Scientist, Vox, CNN, Spiegel and quite a few other news outlets. Kudos, Tun Jan Young for installing the ApRES[…] 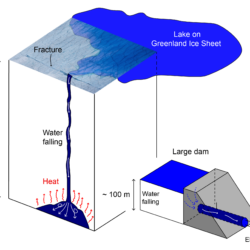 Our research has provided the first clear evidence that the Greenland Ice Sheet is not only melting rapidly at its surface but from the bottom up as well. Huge quantities of meltwater are produced every summer and when it descends to the bed – a kilometre or more below, energy is converted into heat in[…] 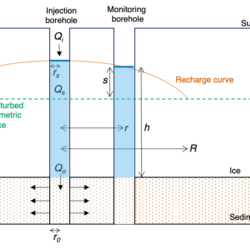 Subglacial hydrological systems lubricate the basal motion of glaciers. In Greenland, few observations exists and it is our core mission in RESPONDER to address this paucity of observations by drilling boreholes to the base of Store Glacier (Sermeq Kujalleq). In a new study, we report detailed measurements of the response of subglacial water pressure to[…] 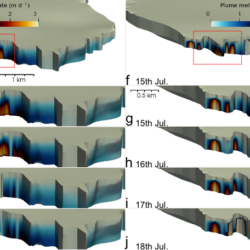 Our project has created what is perhaps the most sophisticated 3D model of a glacier today. Our model is presented in full-Stokes 3D and features evolving hydrological systems, plume-induced melting at the submerged glacier front and iceberg calving. When the model is applied to Store Glacier (Sermeq Kujalleq) we found significant differences in behaviour during[…]

Nice to see water filled crevasses on Store Glacier on the cover of Journal of Geophysical Research – Earth Surface. The cover image accompanied our work on crevasse hydrology, published in the September issue of the journal. Image credit goes to Tom Chudley, who led the drone surveys and is first-author on the study, which[…] 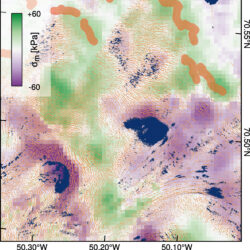 Our work with drones and uncrewed aerial vehicles (UAVs) continue with a new instalment out this week in JGR Earth Surface. This time, RESPONDER team member and former PhD (now Dr) Tom Chudley used directly georeferenced drone imagery from Store Glacier as training data for satellite image analysis on a much larger scale. Read it[…]